I haven’t said much about what is happening across the U.S. this week.  Please don’t misunderstand my silence for apathy.  On the contrary, there have been so many deep emotions floating through our house this week that trying to even explain the pain I hear from people around me is not easy.  Putting all your hurt out there for people to read is personal and raw, and I fear that I won’t represent the issue well.  I have also debated about whether the problems in the U.S. are relevant to Grain of Rice Project and our ministry in Kenya, and I’ve asked myself whether it is appropriate to write about this topic here.  And the conclusion I’ve reached is that we are all people; we are all connected across the globe.  We are all made in God’s image, and when Jesus sees one part of the body hurting, the whole body is hurting.  Friends, people of color have been hurting in our country for a long time. 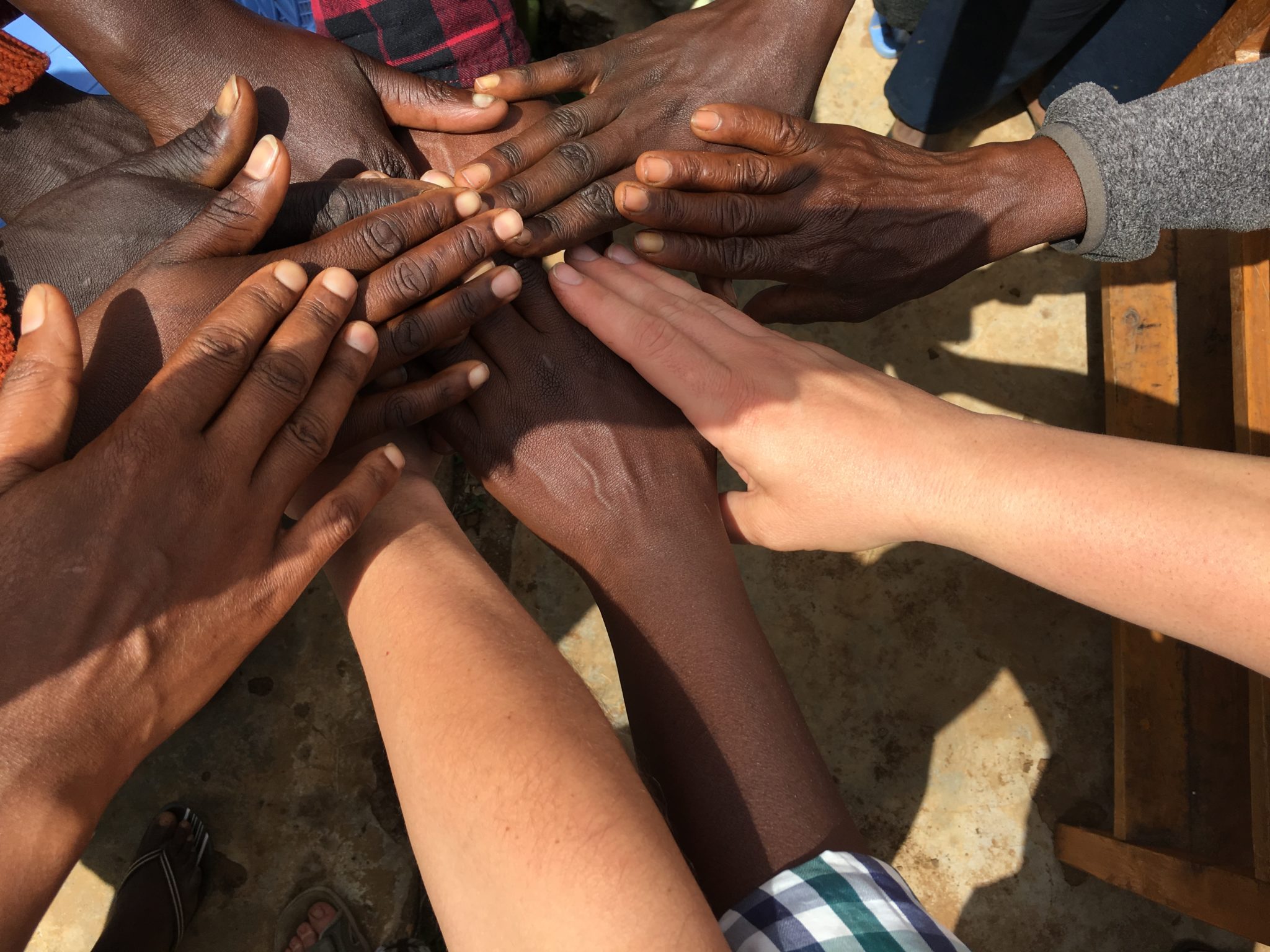 I am white.  I know I am privileged.  I have spent a lot of time working with people in different cultures, races, socio-economic groups, tribes, languages, etc, and still, I mess up and sometimes say insensitive things.  My lens can be skewed.  I have to humble myself in repentance because God calls us to unity and to be broken of any pride that comes with privileged situations.  The hospitality I have received in Kenya has been warm and generous.  People from desperate situations with few possessions have opened their homes, welcomed me in, and fed me special meals, all while barely having enough for themselves.  Americans ask me all the time if I’m afraid to go to Kenya, and I always tell them no.  In fact, my husband is much more afraid to be in the U.S. than I am to be in Kenya.

If you’ve missed my family’s story, my husband is black and from Kenya.  Our child is both black and white.

Before getting married, I knew that prejudice and racism existed and had seen it at times, but I just didn’t get how very bad it can be.  I remember the day my friend who is black came and told another friend that while she was leaving JCPenney, some young kids pulled up in a car, threw a snowball at her and called her the “n” word.  The incident of hate was shocking to me. I continued to see more and more things unfold after my husband moved to the U.S.  Being a mixed-race couple means that you unfortunately, get used to people staring at you or yelling comments as you walk down the street.  There are small annoyances like when people cannot understand my husband’s accent and instead of asking him to explain something again, they look at me to “translate.”  But these small annoyances are minor in comparison to other issues like the day my husband was falsely accused of shoplifting as he attempted to leave the hardware store, prompting involvement of management, and him being completely embarrassed.  Or being called the “n” word crossing the street on his way into UPS with my heavy packages.   Or the day he was walking outside between buildings at work, when a car rolled up to the stop sign and yelled out the “n word” prompting fear that he wasn’t safe at his job.

There was an evening he was studying at the local university library because he liked the quiet environment and someone called in a bomb threat. Everyone began evacuating the building, the SWAT team was called in, and while many students went back to their dorms, my husband was headed towards his car to drive back home.  The SWAT team forced him and two other students (one who was also a minority) to lie on the ground, weapons very close to their faces.  He was eventually allowed to leave after he had surrendered his driver’s license to them, which they kept.  He showed up at our house, white as a ghost, in complete terror, telling me he’s never seen guns like those before.  And sadly all I could think about was the fact that he no longer had a driver’s license.  It had taken him more than a year to legally navigate the complicated system and obtain the correct paperwork to get a U.S. license, and now it was gone.  It took several hours that night of our white, male neighbor going with him to different police stations to try to get his ID back.

I remember being together in another large university city, eating in a restaurant, when I overheard our waitress talking at length to the table behind us about how her job wasn’t that great because of all the foreigners around.  This comment bothered me so much, I decided to privately pull her aside and ask what she meant, and all she could say was “foreigners didn’t tip very well.”  I assured her that my husband was also a foreigner and happened to tip very well and that the comment was very hurtful.

There was the evening we were enjoying pizza at a restaurant with a friend in a small town when a man walked in with a Confederate flag on his hat and proceeded to stare us down menacingly at our table as we finished our meal.  I have never been so uncomfortable in all my days of eating out, and all I could think to do was pray a lot, hurry, and bounce our baby son happily on our lap to get him to laugh.  I kept thinking, surely he won’t hurt us if the baby is smiling.

Another day I drove to Michigan while my husband napped in the passenger seat.  Suddenly I came upon an overhead bridge across the highway filled with a line of people waving Confederate flags.  I tensed up immediately and almost panicked.  Were they going to try to hurt my husband?  I looked over and was thankful that he was asleep.  This flag, with its history of slavery and oppression, sends a statement that certain people are not welcome here in our country.

On a separate occasion, my husband went to visit one of our very sweet friends.  This friend wasn’t home but another relative who did not know Edwin answered the door and proceeded to start screaming and yelling at him to leave before he could even explain who he was.  Our friend’s kids were in the background and saw the whole incident, which was the saddest part.  My husband left in shock at being turned away and after calling me, I called my friend, who was very embarrassed.

I recently told someone in our neighborhood that we planned to sell our house, and she said, “Oh, you probably won’t have any trouble selling your house because you don’t have any black people living nearby, do you?”  To which I reminded her that both my husband, and the baby in the stroller I was pushing were both black, and she said, “Oh, that doesn’t really count.  Your husband is more oriental.”

You see, for people of color, people who are minorities, everyday mundane activities can be filled with fear.  I am not telling you these things so you can feel sorry.  I’m telling you so that you can be aware.  These are only the outward parts that we can see, and maybe you are saying, “Oh, I would never do that or think that.”  But most of the prejudice happening in our country is more subtle than these incidents.  It’s the unconscious parts that spill into our actions and create devastating consequences.  My African American friend today told me that she remembers being accused of plagiarism by her English teacher and being told there was no way her writing could be that intelligent or that good and that surely the white girl sitting behind her must have helped.

Do you have conversations with your one-year-old about the color of his skin?  We do.  I celebrate the fact that he is both black and white, that God has made him handsome, with an intelligent brain for thinking and a heart for loving.  I pray over him that he can be a unifier and bring people together, that he can celebrate his heritage of being both Kenyan and American.  We look for books with characters that are black and white and other races; books about people from other parts of our world, and we hang maps around our house and point to the 2 continents he’s from.  I know that he doesn’t understand yet, but one day he will.  We have to start having these conversations with our kids now,  if they’re only 1 or if they’re 21.  And we have to have them with adults too.  We don’t have to pretend to be color blind.  We can talk about our differences and learn from them; celebrate them.  We can question the things we disagree on.

Friends, our nation needs healing.  And this healing can only begin to happen if we open our hearts.  This is not about lumping everyone into one category and saying that all policemen are bad or all protestors are looting and rioting.  Of course not--we’ve seen police officers joining peaceful protests and others speaking out against the death of George Floyd.  We’ve seen peaceful protests in our city, and we know many wonderful police officers.  This is about examining our own hearts and asking, what biases do I have?  How can I love better and stop the hate?  How can I be a changemaker and bring healing?  Let’s look at our minority friends and neighbors and say, I see you and you are important.