Last week it was the toxic smell of burning plastic drifting in our windows at 5 a.m. that just about drove us to the edge.  When it starts to become a daily occurrence, which causes a choking fit that cannot be stopped even when smothering a pillow over your face, I can assure you that you want to do something.  I mustered whatever calmness I could, and threw on sandals before walking through 2 gates, around to the block behind our house in Kibera, only to discover that I could not determine which house was located directly behind us.  After many attempts of turning my head and trying to see which house was tall and short and if it had an antennae and who’s house had plants growing out of the shingles, Edwin and I were pretty sure we’d determined where the plastic burning was coming from.  I knocked on the gate trying to smile.  What proceeded was a conversation with a high schooler, who told me that there was no trash burning, but then after begging her to go check again, she admitted that it was in fact burning and agreed to put it out.  And then after acquiring this small victory, I walked back around the block, only to discover that the person next door was now burning a plastic dish rack and other random trash, which sent black smoking billowing up with more toxic smells.  Edwin and I made futile attempts to convince the woman that this was quite bad for all of our health and could in fact cause serious diseases, such as cancer, only to watch her chew and spit sugar cane into the bush and tell us in an irritated voice that she’d never had cancer and it wasn’t a big deal.  We offered to let her put anything she wanted into our trash for the garbage people to pick, but she just kept angrily spitting her sugar cane.  And of course  in my stubbornness, I went and pulled the last bits of the burning dish rack out of the fire, stomped on the last flames, and proceeded to have melted plastic all over my shoe. 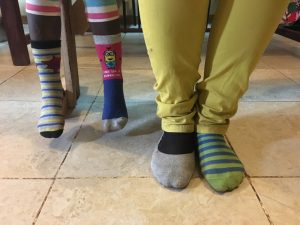 And of course the next morning, the plastic smell was drifting up our window again at 5 a.m. and I again went to talk to the high school girl, who again insisted she wasn’t burning anything.  But this time I met a neighbor, who very reasonably said she’d talked to her, and miraculously the 5 a.m. burning has stopped.

But of course this morning at 10 a.m. there was a new burning smell drifting up from the front side of the ho

And as this all transpires, I realize that I cannot win, that I am not in control, and that it is really hard to convince people of something if you do not know them well and they do not trust you.

These are just small stories of small challenges that are arising everyday.  Today I took a piki piki (motorcycle taxi) very far to an appointment because my Uber taxi did not show up, and as I was going, I thought I had made the most ridiculously stupid decision ever of putting myself in such danger.  We whipped past cars and a truck nearly pulled out in front of us, and by the time we got off I wondered if my heart could take much more because I felt like I had narrowly escaped death.  Apologies to my mom for making you worry.  I promise to try harder and pray for a better Uber!

But despite these small irritations, there are really other heart warming things.  On Saturday we had interviews for new students who are interested in GORP Kids Program.  This process was taking a lot longer than I’d hoped, and by the time the last parent came in, I’m pretty sure all we were thinking about was being done for the day.  But I think God had other plans.  Somehow as we were nearly wrapping up the interview, this lady started telling us about how she was so desperate for a job that she decided she wanted to sell socks.  But when she went to go buy the socks to sell, she could not afford them.  But there was a woman selling bundles of mix matched socks, and she told this parent that she should just take these mix matched ones and try to start selling them.  And so she did.  But it went beyond the socks.  She used the mix-matched socks as an analogy to talk about how all Kenyans are from different tribes and look different, but yet we are all united as Kenyans.  She started writing poetry and performing in places and sharing with her customers.  And although this woman is still living simply and still struggling, she is using something as simple as socks to spread the message of peace.  In a place where tribal and political lines are running deep, especially leading up to next month’s election, it is so encouraging to see a woman taking something small and turning it into something greater.  I hope that you are inspired to take a small idea, a small way that God has gifted you and to use it for a bigger purpose.  Because if we only see the burning trash in our lives (the dark, heavy things) we will never see our full potential.