Town…such a small word for such a crazy experience.

“Town” is how people refer to downtown Nairobi.  “I’m going to town today,” they’ll say.  But to me, town is not really a place but an adventure.  I started having dreams at 5 a.m. this morning about going to town.  I’m blessed and have nothing to complain about, but still it is one of my least favorite things to do.  The whole experience is overwhelming.  First, there are traffic jams everywhere, with matatus driving on the sidewalks, and lorry carts being walked amongst the cars; jay walking is the norm, and should you choose to use the sidewalk, you must shimmy between all the vendors selling their coats, hats, scarves, shoes, and ot 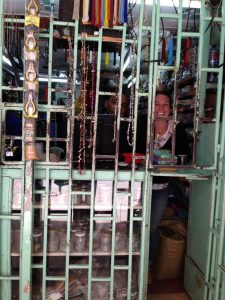 her things on the ground.

So off Naomi and I went a 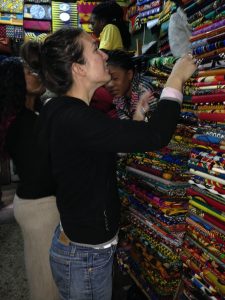 t 9:15 a.m.  We made stops to pick up beautiful recycled glass beads from Ghana, zippers, beads, wire, yarn, and too many other things to count.  The process at each shop was painfully slow.  Every receipt had to be handwritten and then rung manually into a cash register, where you are issued an official receipt.  Often the shops were out of what we wanted (people are stocking less things for fear of looting during the upcoming election), and so one worker acted as a runner to travel to other shops trying to find enough of what we needed.  Most of the items are behind counters and bars, so you have to explain what you want and point before someone brings it to you.

After a few hours, our bags became so heavy that we could no longer carry them, so we stopped outside of one of the shops to wait for an Uber.  During the 30 minute wait, the street vendors tried to sell me scarves and I watched as suddenly everyone frantically grabbed their wares (which are laid out on rice sacks on the ground) and took off running down the street.  Thankfully, I experienced this phenomenon in 2011, so I now know not to panic like I did the first t 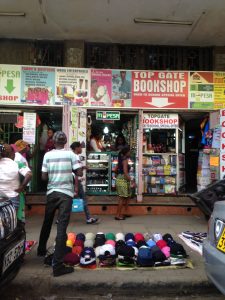 ime…it is only the city council (who act like police enforcers), who were coming to fine the vendors for not having a permit to sell on the street.  The vendors all watch out for each other, and they whistle loudly when a city councilman is coming, and then everyone scatters in various directions.  In the process, they also lose some of their merchandise.  Today after all the scattering, I saw one man carrying a single baby shoe, trying to look for the vendor it belonged to so that he could 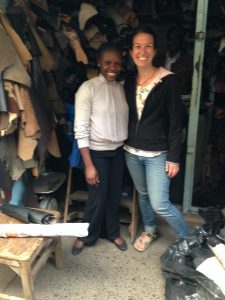 return it to its mate.

On some very positive notes, the ladies selling fabric were very patient with me today.  Normally they are shouting “sister, sister” and trying to get me to choose fabric from their 5 foot high stack.  But last time I was there, I agreed to go around and look at each person’s stack if they would just give me time and stop shouting at me.  So today there was no chanting as I looked through each stack and only the occasional person holding up a new fabric trying to convince me to buy it.  Then there were the people at KOT beads who let me come behind the counter to choose beads, and the Uber driver was a God-send.  He literally waited for us for more than 45 minutes while we went to another market to meet Richard who sews our leather.  Richard took us through the twists and turns of hundreds of stalls where hundreds of people were frantically sewing and gluing beaded shoes, purses, baskets, wallets, and so many other things that I lost track. 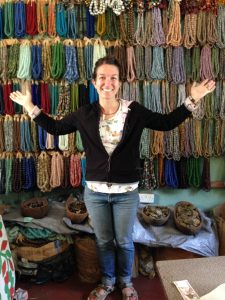 We sifted through piles of leather looking for just the right color and price.  Naomi, is also amazing.  She knows how to bargain; she knows where to find each individual supply; she can navigate town with ease; and she’s super organized.

After all this, we were exhausted.  For me, just being in Wal-Mart in the U.S. is over stimulating, so all the colors and choices and small spaces just become too much.  Even the West African men selling the beads are just selling them out of their 1 room apartments, where you must squeeze past the bed to glance at the wall.  In any case, we made it back safely in the dark, just in time for the electricity to finally come back on after being out the entire day.  It was 7 p.m. and we had been gone 10 hours!  Can I just say that I appreciate this experience because I see what people have to go through on a daily basis to make a living and to find supplies to make their crafts.  I’m also really grateful for conveniences such as Amazon Prime…and I know that is such a silly American thing to say.   But really, we have no idea how “easy” some things really are in the U.S.  There are so many good things about Kenya too, but today I really missed Amazon! 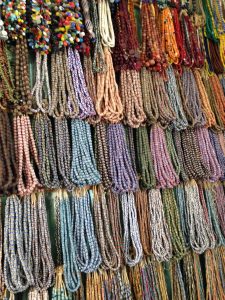