I could make out the faint noise as I stood at the bathroom sinking washing my face and hurriedly trying to prepare myself for the day.  I hoped I had misheard.  I dashed into the kitchen and cracked open the sliding door and waited, listening intently.  Nothing.  So I had been imagining.  And then, just when I was about to turn back to my daily agenda, I heard it--the crowing of a rooster, who was clearly just developing its lungs and deciding to let the whole neighborhood know.  The problem was, this was our rooster, and we lived in town, and there was a No Roosters Allowed sign (or rather an ordinance), and I immediately started panicking that the neighbors were going to call the cops.  We just wanted eggs.  The end.  There weren't supposed to be any roosters involved, but of course, when they start out as chicks, it is almost impossible to tell the difference (at least if you're me and you didn't grow up on a farm).  We called the neighbors to see if someone would take the rooster on their farm and looked into other options.  But alas, none of them panned out.

And that, my friends, is why the next day, I found myself desperately chasing the rooster around the yard, before finally catching it and holding it down on a cutting board while my husband prepared to turn it into our dinner.  I will spare you the details, except to say that at one point I told my husband I was going to flinch and so he should be careful not to accidentally cut off my hands when I started becoming frantic.  I'm really sorry if you're a vegetarian and you're reading this.  I hope you will still love me. 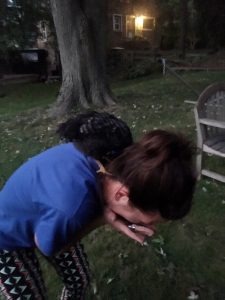 Me, nearly in tears, as one of the chickens flew onto my back

Let me just back this story up...6 months ago when they passed a local chicken ordinance, we immediately decided to get chickens.  I grew up in the country, but honestly, I'm half terrified of animals.  I like the idea of having fresh eggs and understanding where our food comes from.  It seems satisfying to work for what you eat rather than nonchalantly grabbing the eggs as I steer my cart through Aldi, but still, this was a stretch for me.  For the first month, there were 4 chicks living in my kitchen in a box.  It didn't take long for them to start becoming brave enough to jump out of the box up on our kitchen table.  And that was the point where I evicted them from kitchen.  However, through that whole process, even though it was a stretch, it still seemed kind of normal.  I had spent several months living with a chicken in the kitchen of my house in Kenya.  I had gone with Pamela, a GORP artisan, to visit her sister's house, and she had them running all over inside and outside of the house.  I was constantly dodging chicken droppings on my way to the outhouse, and I was plenty used to their crowing in the mornings.

Someone asked me if I ever thought that when I first went to Kenya and experienced having a chicken living in my kitchen there, that I'd ever think I'd also have one in my U.S. kitchen.  No, I did not.  But I do think that the places we live and the people we spend time with can start to greatly impact our lifestyle and stretch us and open us up to new possibilities.  I'm not suggesting that you have to get a chicken, but I am asking you to think about how God is calling you to step out or step up.  My friend Emily explained this really well.  She recently said, "I have this overwhelming feeling that I have so much more potential that I haven't ever actually cared to tap into.  I'm so comfortable with the status quo...I hide behind organization...I hide behind self-given labels.  I have so much fear of the unknown.  But God does his best work in the unknown."  We spend so much time living in fear and trying to plan things out.  I did not plan for a rooster, but I'm glad it came to me.  There is so much opportunity for us to learn and grow if only we will be willing to take the risk.